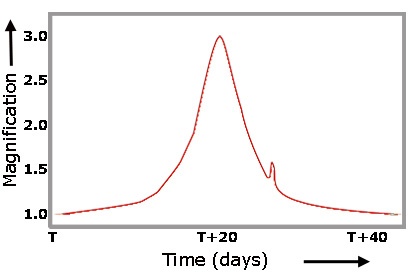 This diagram illustrates a typical microlensing light curve. A massive object, or lens, passing in front of a background source object can result in multiple distorted, magnified and brightened images of the source. Microlensing refers to the cases where the lens mass is such that the multiple images cannot be individually resolved and the light from the images is blended. The brightness of the combined image is a function of the projected separation of the lens and source as viewed by the observer. It varies as the three elements move relative to one another resulting in a characteristic light curve as illustrated above. The presence of a companion planet can be detected by the presence of a small, second peak in the light curve.
View »
6-Feb-2023 10:32 UT