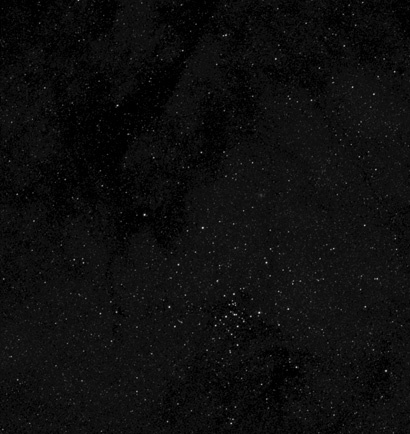 The image above is an extract from a mosaic of OSIRIS Narrow Angle Camera images which has been constructed from observations of a region of the Galactic Bulge, south of the Galactic Centre. The full mosaic can be viewed as a flash file which scans along the entire mosaic and can also be downloaded as a high resolution file (see links on the right-hand menu).

The observations were performed as part of the Rosetta Cruise Science programme "Observations of gravitational microlensing events with OSIRIS", see Kueppers et al., 2007. It covers a region of 16 × 2 degrees: Galactic longitude from -5 to 11 deg, Galactic latitude from -5 to -3 deg. This is a large part of the area routinely monitored by ground-based programmes for microlensing events.

The mosaic was constructed by combining images of 8 fields each of which was observed 7 times between 7 September and 4 October 2008. The exposure time (300 seconds) for each image was chosen to provide a good signal-to-noise ratio for the brighter microlensing events. As usual for such space-based imagery, some cosmic ray events are visible as streaks.