Rendezvous with a comet

Rendezvous with a comet 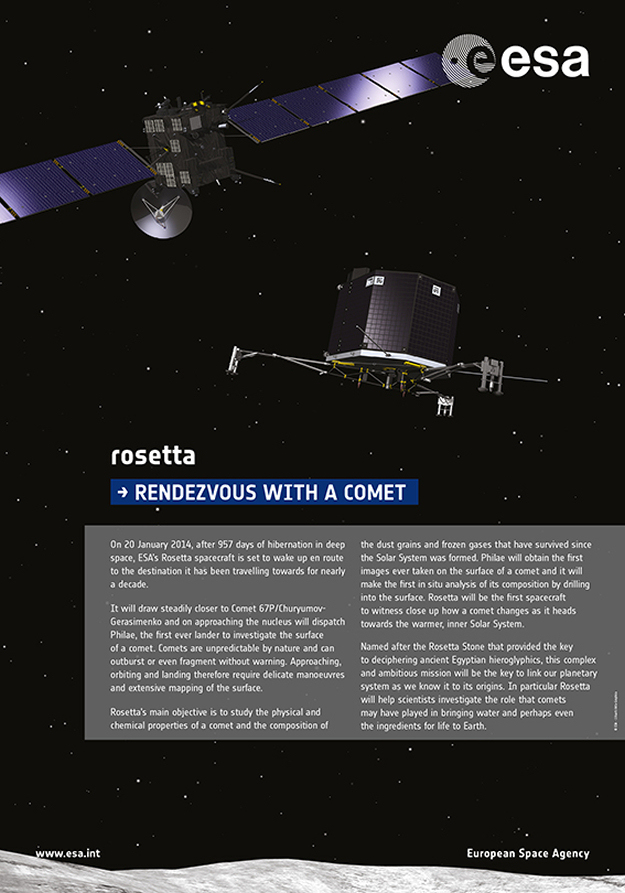 On 20 January 2014, after 957 days of hibernation in deep space, ESA's Rosetta spacecraft is set to wake up en route to the destination it has been travelling towards for nearly a decade.

It will draw steadily closer to Comet 67P/Churyumov-Gerasimenko and on approaching the nucleus will dispatch Philae, the first ever lander to investigate the surface of a comet. Comets are unpredictable by nature and can outburst or even fragment without warning. Approaching, orbiting and landing therefore require delicate manoeuvres and extensive mapping of the surface.

Rosetta's main objective is to study the physical and chemical properties of a comet and the composition of the dust grains and frozen gases that have survived since the Solar System was formed. Philae will obtain the first images ever taken on the surface of a comet and it will make the first in situ analysis of its composition by drilling into the surface. Rosetta will be the first spacecraft to witness close up how a comet changes as it heads towards the warmer, inner Solar System.

Named after the Rosetta Stone that provided the key to deciphering ancient Egyptian hieroglyphics, this complex and ambitious mission will be the key to link our planetary system as we know it to its origins. In particular Rosetta will help scientists investigate the role that comets may have played in bringing water and perhaps even the ingredients for life to Earth.