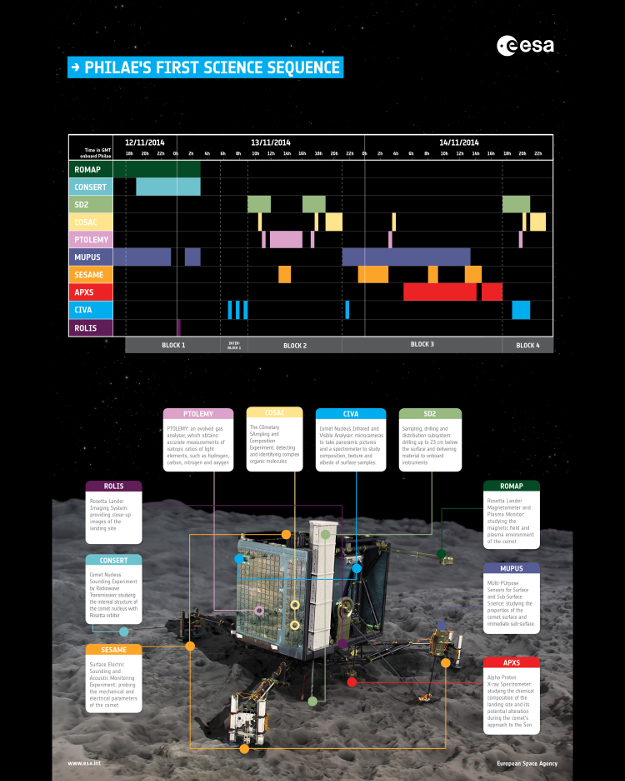 A timeline of the science operations that Rosetta’s lander Philae will perform during the first 2.5 days on the surface of Comet 67P/Churyumov–Gerasimenko.

It does not include the experiments conducted during the seven-hour descent or immediately upon touchdown and in the 40 minutes after as the separation, descent and landing operations and experiments conclude (see this graphic for a summary of those activities).

The instruments are listed on the left-hand side of the top diagram, and explained in more detail in the graphic in the lower diagram. The time is given in GMT on the lander; the lander relays data to the orbiter for storage and is queued for transmission to Earth. The one-way signal travel time Rosetta and Earth during 12–14 November is about 28.5 minutes.

The experiment sequence is divided up into 'blocks'. These follow a certain order because some measurements require Philae’s 'body' to be rotated, lifted or lowered before performing the next set. For example, during the 'inter-block', Philae will make these movements and take a new panoramic image. The times indicated for the experiments may also include ‘deployment’ time as, for example, for APXS during the third block.

The duration of the first science sequence that can actually be executed depends on the lifetime of the primary battery. If solar power is available to recharge the secondary battery then this may mean the full sequence can ve executed. The ‘long-term science’ phase, not included in this graphic, also depends on how long it takes for the secondary battery to recharge, , as this determines how often activities could be executed. This phase could last until March 2015.