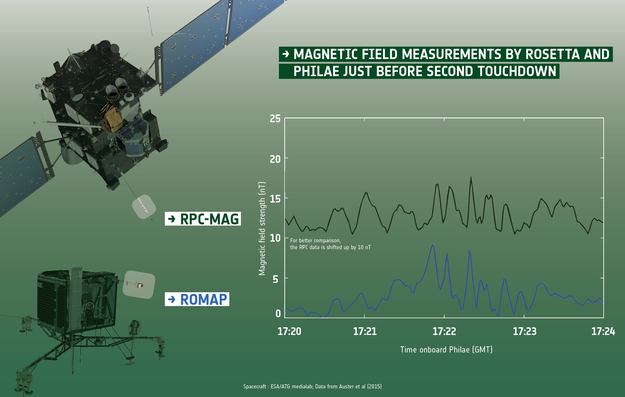 Complementary data collected by the Rosetta Plasma Consortium fluxgate magnetometer (RPC-MAG) on board the orbiter (top) and the Rosetta Lander Magnetometer and Plasma Monitor (ROMAP) on board the lander (bottom) have been used to investigate the magnetic properties of Comet 67P/Churyumov-Gerasimenko.

The pictures on the left indicate the positions of the two instruments on the orbiter and lander, respectively. The graph on the right shows the data collected by the instruments. Note that to better see the complementary nature of the two data sets, the RPC-MAG data have been shifted up by 10 nT.

The data shown cover the period immediately prior to the second touchdown of Philae at 17:25 GMT (onboard lander time) on 12 November 2014. The first touchdown was recorded at 15:34 GMT, the collision at 16:20 GMT, and the final touchdown at 17:31 GMT.