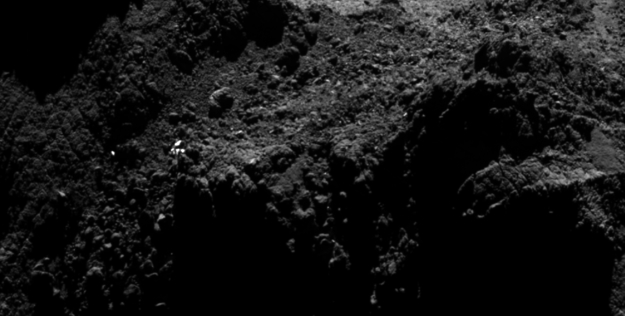 Rosetta and Philae teams continue to search for the current location of the lander, piecing together clues from its unexpected flight over the surface of comet 67P/Churyumov-Gerasimenko after its initial landing on 12 November 2014.

This cropped image from the OSIRIS narrow-angle camera (NAC) on Rosetta is a zoom on the region of the current CONSERT ellipse. The ellipse represents the CONSERT team's current best estimate of the outer bounds of the likely location of Philae based on a number of simulations.

A number of bright dots are seen in this region. As only one (at most) of these could be the lander, the majority must be associated with surface features on the comet nucleus.

A larger image of this region, with the CONSERT ellipse also indicated, is available here.