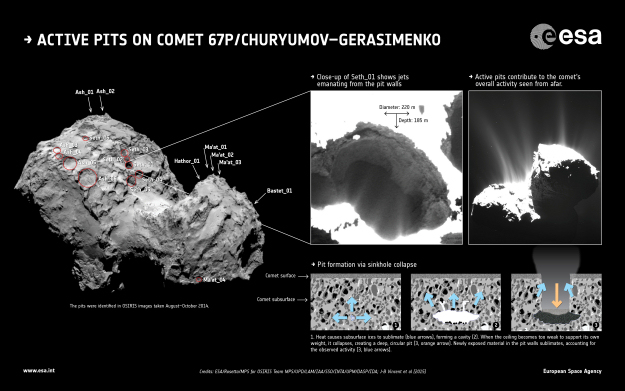 Left: 18 pits have been identified in high-resolution OSIRIS images of Comet 67P/Churyumov–Gerasimenko’s northern hemisphere. The pits are named after the region they are found in, and some of them are active. The context image was taken on 3 August 2014 by the narrow-angle camera from a distance of 285 km; the image resolution is 5.3 m/pixel.

Middle, top: close-up of the active pit named Seth_01 reveals small jets emanating from the interior walls of the pit. The close-up also shows the complex internal structure of the comet. The image is a section of an OSIRIS wide-angle camera image capture on 20 October 2014 from a distance of 7 km from the comet surface. Seth_01 measures about 220 m across.

Right, top: context image showing fine structure in the comet’s jets as seen from a distance of 28 km from the comet’s surface on 22 November 2014. The image was taken with the OSIRIS wide-angle camera and has a resolution is 2.8 m/pixel. In both images the contrast is deliberately stretched in order to see the details of the activity. The active pits in this study contribute a small fraction of the observed activity.

Left, bottom: how the pits may form through sinkhole collapse. 1. Heat causes subsurface ices to sublimate (blue arrows), forming a cavity (2). When the ceiling becomes too weak to support its own weight, it collapses, creating a deep, circular pit (3, red arrow). Newly exposed material in the pit walls sublimates, accounting for the observed activity (3, blue arrows).