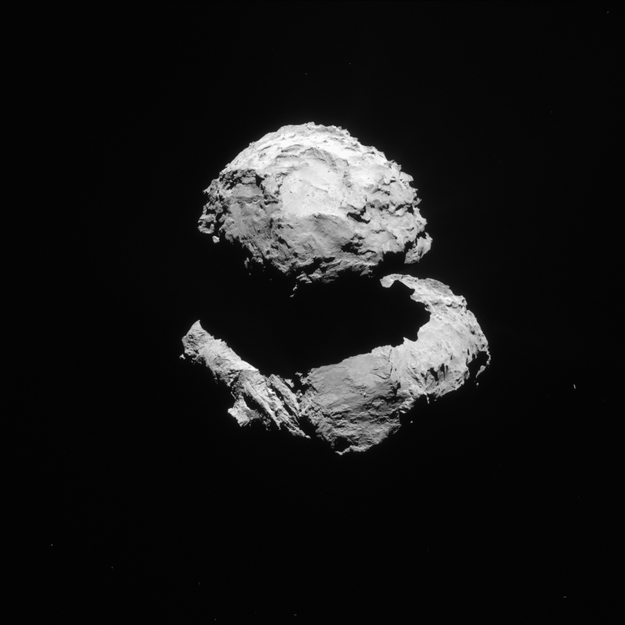 Much of March 2015 was spent flying trajectories between about 70 km and 85 km from comet 67P/Churyumov-Gerasimenko; this image was taken on 20 March at a distance of 83.7 km. It has a scale of 7.1 m/pixel and the image measures 7.3 km across.

Thanks to the gradual change in illumination as the comet progressed on its orbit towards the Sun, regions previously cast in shadow began to emerge into the sunlight. Here, what appears as a smoother swath of material sandwiched between more rugged surrounds can be seen on the large lobe left of Babi, and may incorporate parts of Aker. On the small lobe parts of Bastet are seen 'face-on', below the 1 km wide Hatmehit depression seen in the centre.

While this image has been processed to focus on the contrasts of terrain on the nucleus, activity also started to rise. Moreover, during a close 14 km flyby on 28 March, the spacecraft experienced difficulties in navigation at these closer distances thanks to the growing number of dust particles ejected by the comet. This forced spacecraft operators to move Rosetta to safer distances some 100–200 km from the comet.