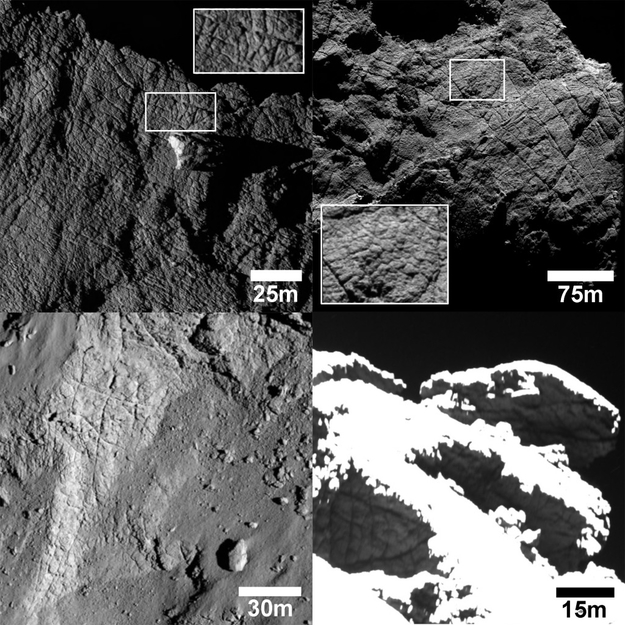 The variety of fracture networks found on comet 67P/Churyumov-Gerasimenko, with an indication of physical scales.

The top left image shows polygonal fractures on the edge of the Apis region, on the comet's large lobe. The zoomed-in insert shows that the patterns are composed of irregular 2–5 meters-wide polygons.

The top right image shows a pervasively fractured region at the edge of the Atum region, close to the comet's neck. Fractures vary greatly in length, with the longest visible one measuring about 250 m. Within this irregular pattern, a more regular pattern of 2–6 m-wide polygons is also visible, as shown in the insert.

The bottom left image shows regular patterns of fractures at the edge of the Nut region, a narrow, elongated depression on the small comet lobe. Patterns of 15 m-wide polygons with orthogonal fracture intersections are also visible.

The bottom right image shows polygonal patterns on the edge of a ridge separating the Anubis/Atum regions from Ash and Seth, on the large comet lobe. The image has been overexposed to highlight the shadowed features, and smaller polygons with sizes of 2–5 m are also visible.

A non-annotated version of the image is available here.