The water-ice cycle of Rosetta's comet

The water-ice cycle of Rosetta's comet 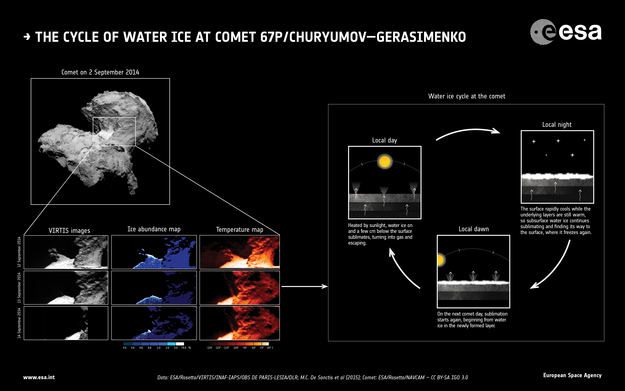 The images were taken on 12 (top), 13 (middle) and 14 September (bottom) and focus on Hapi, a region on the comet's 'neck', one of the most active spots on the nucleus at the time.

By comparing these images and maps, the scientists have found that water ice is present on colder patches, while it is less abundant or absent on warmer patches. In addition, water ice was only detected on a patch of the surface when it was cast in shadow. This indicates a cyclical behaviour of water ice during each comet rotation.

Right: the daily water ice cycle. During the local day, water ice on and a few centimetres below the surface sublimates and escapes; during the local night, the surface rapidly cools while the underlying layers are still warm, so subsurface water ice continues sublimating and finding its way to the surface, where it freezes again. On the next comet day, sublimation starts again, beginning from water ice in the newly formed surface layer.