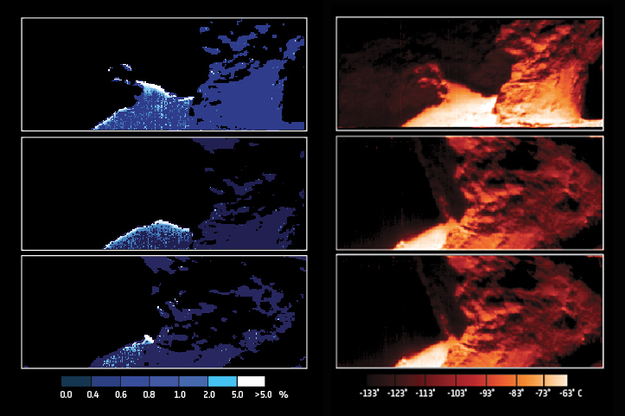 Maps of water ice abundance (left) and surface temperature (right) focusing on the Hapi 'neck' region of Comet 67P/Churyumov-Gerasimenko. These maps are based on images and spectra collected with Rosetta's Visible, InfraRed and Thermal Imaging Spectrometer, VIRTIS on 12 (top), 13 (middle) and 14 September (bottom) 2014.

The ice abundance map is based on images taken with VIRTIS in the optical band at 0.7 micron and VIRTIS infrared spectra, combined with models of the surface and near-surface material. The infrared spectra taken in low illumination conditions show a strong dip at wavelengths between 2.7 and 3.6 micron, showing the characteristic shape of an absorption feature caused by water ice on the surface. In the water ice abundance maps, white indicates higher abundance of ice on the surface (over 5%) while blue hues indicate lower abundances: the darker blue, the lower abundance of ice, down to 0%.

This indicates a cyclical behaviour of water ice during each comet rotation.