The tail of Comet 46P/Wirtanen

The tail of Comet 46P/Wirtanen 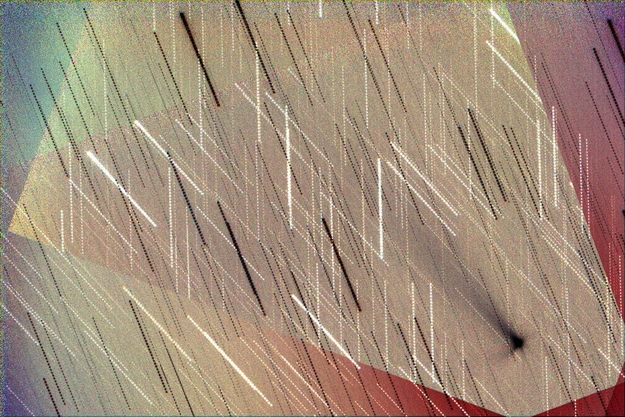 The comet is visible in the lower right part of the image, with its tail extending to the upper left. The diagonal stripes across the image are star trails.

This image is a composite of 3×33 short, 15 second exposures taken using RBG filters on the ROTAT telescope, a coma-corrected Newtonian (60cm f/3.2 equipped with an SBIG STL11000 full-frame CCD). It was taken within the framework of a research project by two 11th grade students from Mannheim, Germany, at the Hector Seminar, an organization that fosters gifted high-school students in STEM subjects; the students are being supervised by Carolin Liefke from Haus der Astronomie in Heidelberg, Germany.

The image has been processed with the Larson-Sekanina rotational gradient filter technique to enhance the contrast and reveal the comet's tail.