How Philae left its mark during touchdown two

How Philae left its mark during touchdown two 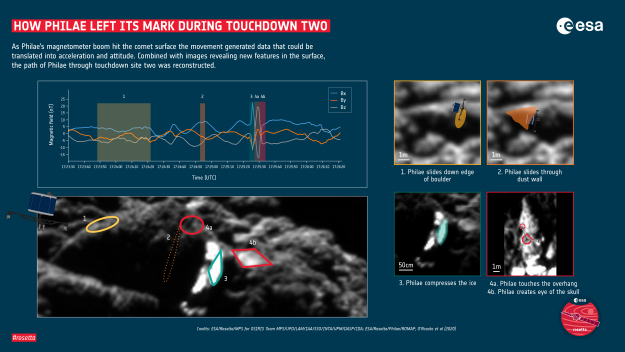 This graphic presents the data collected by Philae's ROMAP instrument – a magnetometer boom – during the time of the second touchdown on Comet 67P/Churyumov-Gerasimenko on 12 November 2014, matched with imagery showing evidence of the key moments of Philae's interaction with the surface.

Signatures were created in the magnetic data of the ROMAP boom relative to the lander body when the boom physically moved as it struck a surface (the boom sticks out 48 cm from the lander body). This created a characteristic set of spikes in the magnetic data, which provided an estimate of the duration of Philae stamping into the ice. The data could also be used to constrain the acceleration of Philae during these contacts. The data shows that Philae spent nearly two full minutes at touchdown site two, making contact with the surface multiple times.

The data plot is labelled with five different events, corresponding to the imagery. Initially travelling in a downward direction, Philae slides down the edge of a boulder (1) and flips vertically, rotating like a windmill to pass between two boulders (2) exposing layers of ice in the crevice walls with its feet. A dust wall was created by the windmill action, pushing through the dust that had heaped up between the boulders up to that point in time. The crevice is about 2.5 m long and is curved with a width of 1-1.5 m, allowing Philae to pass through. Philae then stamps a 25 cm imprint of the top of the lander into the comet's surface (3) – a hole made by the top of the SD2 (Sampling, Drilling and Distribution device) tower that sticks up above the top of Philae can be recognised. Philae then climbed out of the crevice, being pushed down once more by an overhang (4a), knocking off material in the process, with its top surface then creating an impression in the dust corresponding to the 'eye' of the feature that resembles a skull face (4b).

The ROMAP data also reveal information about the speed and direction of travel. When Philae first entered the region it was travelling downwards at 20 cm s-1 and forwards at 10 cm s-1. When it left the area it was travelling upwards at less than 1 cm s-1 and forwards at 9 cm s-1. It never flew higher than one metre above the surface in its final flight to touchdown point three, 30 m away.