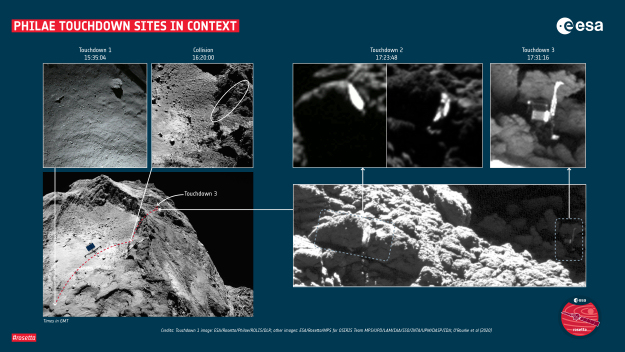 Philae's flight across the surface of Comet 67P/Churyumov-Gerasimenko on 12 November 2014 saw the lander strike the surface in multiple locations. This graphic summarises the main touchdown sites.

At 15:35 GMT Philae made first contact with the surface at Agilkia – the image shown here was taken by Philae's own camera, ROLIS, before touchdown, approximately 40 metres from the surface.

Philae then took flight across the Hatmehit depression on the 'top' of the small comet lobe, colliding with a cliff edge at 16:20 GMT.

This set it on course with the second touchdown site, where it interacted with the surface multiple times over a period of two minutes starting at around 17:24 GMT.

Philae arrived at its final resting place at Abydos, about 30 m away, at 17:31 GMT. The image has been enhanced to allow Philae, hiding in the shadows just 30 metres away from the second touchdown location, to be seen.