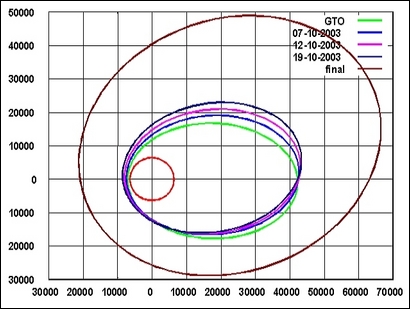 The SMART-1 orbit is continuously modified by the effects of the electric propulsion low thrust. The osculating orbital elements are periodically computed by the ESOC specialists. These elements define the so called osculating orbit which would be travelled by the spacecraft if at that instant all perturbations, including EP thrust, would cease. So it is an image of the situation at that moment. In reality the path travelled by the spacecraft is a continuous spiral leading from one orbit to another. In this diagram the GTO, the osculating orbits at launch and at different times are plotted. The large orbit, marked 'final', is the one SMART-1 is expected to achieve at the end of the radiation belt escape in about two months. The Earth is represented by the red circle at the origin.
View »
8-Feb-2023 03:46 UT