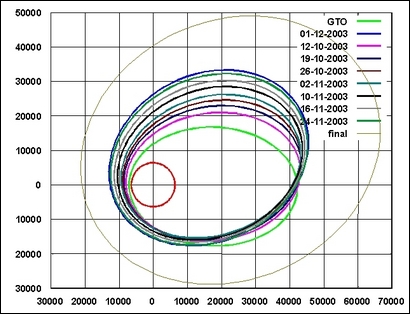 In this diagram the GTO, the osculating orbits at launch and at different times are plotted. The large orbit, marked 'final', is the one we expect to achieve at the end of the radiation belt escape in about one month. From the start, the electric propulsion system has managed to increase the semi-major axis of the orbit by 5606 km, increasing the perigee altitude from the original 656 km to 5783 km and the orbital period by three hours and 50 minutes, from the initial 10 hours 41 minutes to the present 14 hours 31 minutes.
View »
28-Jan-2023 23:23 UT