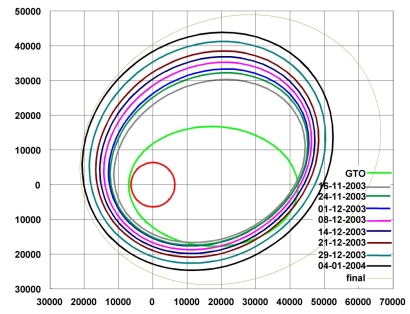 In this diagram the osculating orbits at launch (GTO) and at different times are plotted. The large orbit, marked 'final', is not exactly the same as the one we expect to reach on 7 January. This is due to the change in strategy devised in order to avoid an excessive increase of the apogee height, which would have produced several long eclipses in March (Status Report No. 11, 16 December 2003). The thrust arcs, for the same reason, will, for the next few weeks, be concentrated for a few hours around the perigee point in order to efficiently tune the altitude of the apogee to the maximum allowable duration for the March eclipses (2 hours and 15 minutes).

From the start the electric propulsion system has managed to increase the semi-major axis of the orbit by 13 179 km and increasing the perigee altitude from the original 656 km to 12 801 km. The orbital period has almost been doubled from the initial 10 hours 41 minutes to the present 20 hours and 19 minutes.