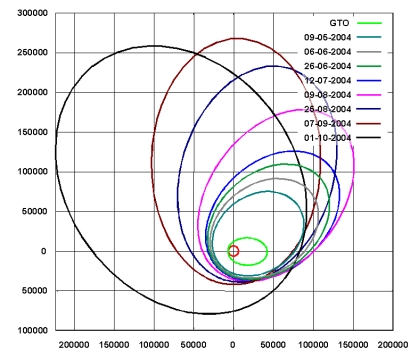 In this diagram the osculating orbits at launch (GTO) and at different times are plotted. The large effects on the orbit expansion, that the combination of the operations of the electric propulsion together with the Moon encounters have, are clearly visible. The Moon effects are mainly in the increase of the perigee altitude and in the rotation of the line of apsides (change in argument of perigee).

Since the start of the mission the orbital elements have been changed by the ion-engine and the lunar resonances as follows:

The inclination of the orbit has now also significantly increased from the initial 7° to the current 12.4°. Increasing the inclination of SMART-1's orbit is necessary to allow for lunar capture, as the Moon's orbit is inclined to the Earth's equator at an angle of currently 28°.