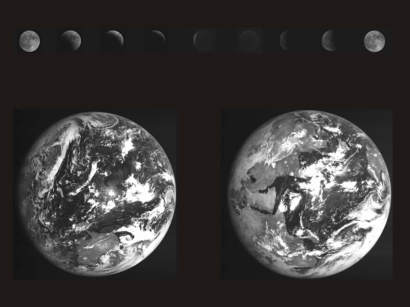 This photo-montage shows a series of images taken with the AMIE camera on board SMART-1 during the second lunar total eclipse witnessed by the spacecraft.

This eclipse took place on 28 October 2004. At that time, SMART-1 was about 290 000 km away from Earth and at its farthest planned distance from the Moon of about 660 000 km. From its vantage point, SMART-1 could see and photograph, for the first time ever, both the Earth and Moon during a lunar eclipse.

The images of the Moon are shown here in a temporal sequence, from left to right. They were taken with the AMIE camera, in visible light, between 1:14 UTC and 4:44 UTC. The 'totality' phase, in the middle of the sequence when the Moon is completely inside the Earth’s shadow, lasted about an hour from 2:23 UTC and 3:24 UTC.

The images of the Earth shown here were taken just before and after the eclipse. The apparent relative size of the Earth and Moon, as shown in this picture, is exactly as seen by SMART-1.

The relative distance between the two bodies, however, is not to scale. In fact, the Earth and Moon were farther apart than the field of view of AMIE and could not simultaneously fit within a single image.

In reality, the physical size of the Earth is about 3.7 times larger than that of the Moon; their diameters are about 12 800 km and 3500 km, respectively. As SMART-1 was farther away from the Moon than from Earth, the difference appears exaggerated.