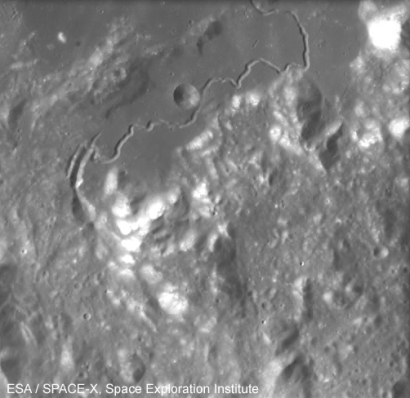 Sinuous rilles are probably the most recognizable of small volcanic features on the Moon. Many partially resemble river valleys on Earth. The rilles mark lava channels or collapsed lava tubes that formed during mare volcanism. Lunar samples indicate that the Moon has always been dry, thus confirming the volcanic origin of the rilles.

This image shows Hadley Rille, the sinuous depression running across the top half of this image. Below it are the Apennine mountains (1-2-km in height). The large crater in the centre of the image is the 5.5 km diameter Hadley C crater.

SMART-1 measurements were used for cross-calibration with in-situ data from the Apollo 15 landing site, near the upper right bend of the rille in this image.