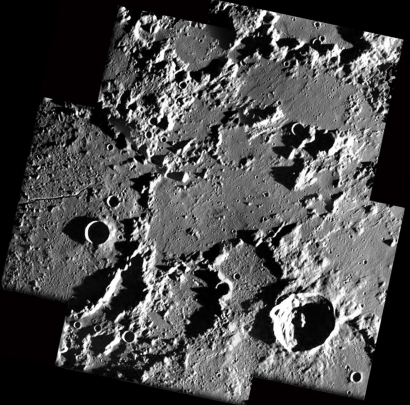 The image is a composite of five AMIE images acquired on 5 and 6 February 2006, from altitudes ranging between 2685 km (bottom of the composite) and 2709 km (top). Each individual snapshot, taken with the AMIE clear filter, is a square of side about 135 kilometres. The whole composite covers approximately 270 kilometres.


Crater C. Mayer, named after an 18th century Czech astronomer, is a relatively young crater. Ejected material is visible around the crater as a smooth hilly area. Terraces formed during crater collapse can be seen in the inner walls of its sharp-edged rim and the crater's interior is rough and irregular. The illuminated central peak appears very clearly.

The outer rim of the original W. Bond crater has been eroded and reshaped, and now it basically consists of an outline of hills and mounts. The interior floor is relatively flat in comparison with the rim region, although there are sections of rough terrain near the northern rim.

In the centre of the walled plain is a rille that runs toward east. To the southeast of this formation is W. Bond B, a circular, simple bowl-shaped crater.