ESA Science & Technology - Highlands and Mare Landscapes on the Moon

Highlands and Mare Landscapes on the Moon

Highlands and Mare Landscapes on the Moon 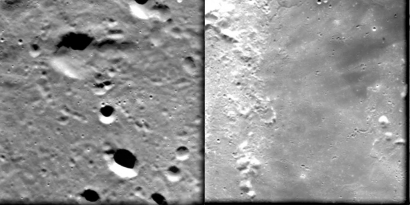 These two images, taken by the advanced Moon Imaging Experiment (AMIE) on board SMART-1, show the difference between lunar highlands and a mare area from close by.

The image on the left, showing highlands, was obtained by AMIE on 22 January 2006, from a distance of about 1112 kilometres from the surface, with a ground resolution of 100 metres per pixel. The imaged area is centred at 26° South and 157° West.

Already when looking at the Moon with the naked eye, it can be seen that there are bright and dark areas on its surface. Centuries ago, the dark areas were called 'maria', presumably assuming that the observer would be seeing water oceans. Today we know that there is no liquid water on our satellite. However, telescopic observations showed that the maria are very flat, and are very different from the so-called highlands. The highlands are heavily cratered and mountainous.

We have learned that the maria are relatively young areas on the Moon which were generated after very large impacts penetrated the lunar crust and excavated basins. During later volcanic episodes, liquid magma came to the surface and filled these basins. When it cooled down and solidified, it formed the large flat areas we can still see today. As this happened in comparatively recent times, the number of impact craters is far less than in the highland areas.

From the two images it is possible to see how highlands present a very irregular topography and many craters, while the mare area is comparatively flat and shows a much smaller number of craters.

The images are raw data and no flat field or other corrections have been applied.