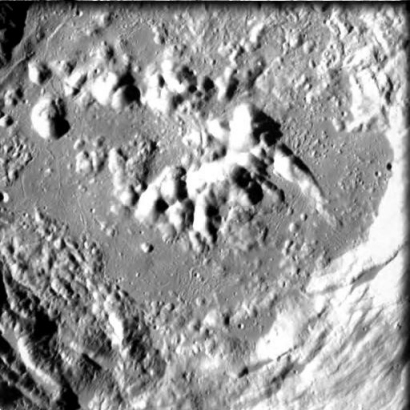 This image of the central peaks of crater Zucchius was obtained by AMIE on 14 January 2006 from a distance of about 753 kilometres from the surface, with a ground resolution of 68 metres per pixel.

The imaged area is centred at a latitude of 61.3° South and longitude 50.8° West. Zucchius is a prominent lunar impact crater located near the southwest limb. It is 66 kilometres in diameter, but due to SMART-1's proximity to the surface, the AMIE field of view covers only the central 35 kilometres of the crater in this image.

Because of its location, the crater appears oblong-shaped due to foreshortening.  It lies just to the south-southwest of the Segner crater, and northeast of the much larger Bailly walled-plain. To the southeast is the Bettinus crater, a formation only slightly larger than Zucchius.

The hills near the centre of the image are the central peaks of the crater, features that form in large craters on the Moon. This type of feature is formed by the impact of a small asteroid onto the lunar surface. The surface is molten and, similarly to when a drop of water falls into a full cup of coffee, the hit surface bounces back and solidifies into the central peak.

The Zucchius crater is named after the Italian Mathematician and astronomer Niccolo Zucchi (1586-1670).