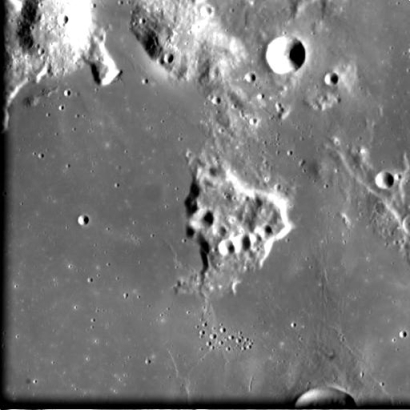 This image, taken by the advanced Moon Imaging Experiment (AMIE) on board SMART-1, shows the region just north of crater Gruithuisen on the Moon.

AMIE obtained this sequence on 1 January 2006, from a distance of 2154 kilometres from the surface, with a ground resolution of 195 metres per pixel. The area shown in the image is centred at 40° W, 34.8° North on the border between Oceanus Procellarum and Mare Imbrium.

The 16km diameter crater Gruithuisen (depth 1.9 km) is only just visible on the lower edge of the image.  Either side of the crater is Dorsum Bucher a small ridge feature which extends for 90 km.

The prominent bowl-shaped crater close to the top edge of the image is crater Gruithuisen B - which is roughly half the size of Gruithuisen at 9 km in diameter.  There is also a large number of secondary craters produced by ejecta particles from a large impact which fell back to the Moon.

According to Head and Mc Cord (1978), the Gruithuisen dome on the Moon represents volcanic features of an Imbrian age which are different in shape and have spectral characteristics different from the surrounding terrain, indicative of a different mineralogical nature. These features are not of a mare nature (lava filled plain) and they are of extrusive origin, that is, they are generated by volcanic material flowing out from the surface and then crystallising.

The composition, morphology, and age relationships of the domes indicate that the non-mare extrusive volcanism in the northern Procellarum region of the Moon continued until about 3.3 to 3.6 thousand million years ago and was partially contemporaneous with the emplacement of the main sequence of mare deposits.

In 1999 Chevrel, Pinet and Head found that spectral characteristics of the dome and the dome-like unit are clearly different from those of highlands and of the surrounding mare basalts. The spectral identification of a widespread dome-like unit suggests that the specific style of eruption deduced for the formation of the domes (that is, viscous flows of possible more silica composition) might have occurred on a regional scale in this part of the Moon, prior to the Iridum event about 3.8 thousand million years ago. This volcanic style appears to be more widespread in the early part of lunar history than previously thought.

The different features are named after Franz von Gruithuisen, a 19th century German astronomer (1774 - 1852). Gruithuisen spent a lot of his time observing the Moon and actually thought it was inhabited. Already in 1840 he proposed that the lunar craters are the result of meteoritic impacts rather than volcanoes, as was commonly believed up into the 20th century.