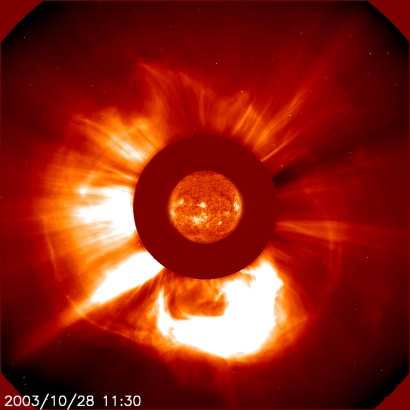 This image shows the CME cloud of the first flare emerging from the Sun on 28 October 2003. It is a composite view of two images, one by the C2 camera of the Large Angle and Spectrometric Coronagraph (LASCO) and one by the Extreme ultraviolet Imaging Telescope (EIT). The LASCO camera is equipped with an occulting disk that blocks out the Sun to be able to study the faint details in the corona. The EIT image of the Sun's disk has been superimposed on the occulting disk in the LASCO C2 image. The EIT image of the Sun's disk is to scale.