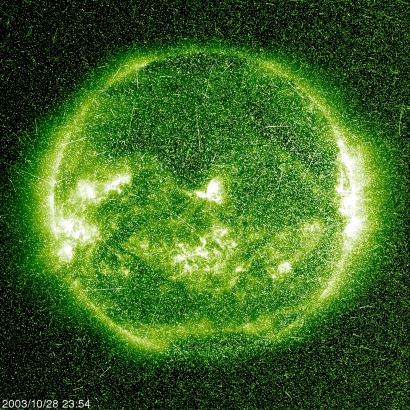 This image from the Extreme ultraviolet Imaging Telescope (EIT) on board SOHO shows the Sun's disk several hours after the first of the two flares. It was taken on 28 October 2003, at 23:54 UT, through a filter centred at 195 Ångström. The shower of energetic particles that ensued after the flare shows up in this image as bright points and streaks, caused by the particles hitting the EIT detectors.

See the related images for another EIT image of the Sun's disk, taken at the time of the first flare (11:12 UT).