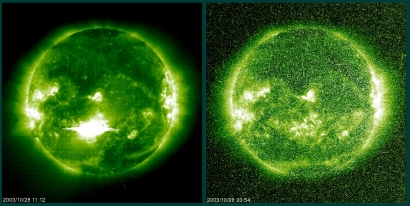 These images from the Extreme ultraviolet Imaging Telescope (EIT) on board SOHO show the Sun on 28 October 2003, and were taken through a filter centred at 195 Ångström. The image on the left is from 11:12 UT and shows the first of the two flares. The image on the right was taken between the two flares, at 23:45 UT, when the instrument was showered in the ensuing storm of energetic particles from the Sun.

The two images can also be downloaded individually from the right-hand menu under "related images".