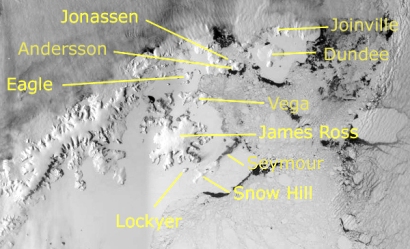 Northern part of Graham Land as seen by one of Rosetta's navigation cameras during the second Earth swing-by on 13 November 2007, from an altitude of around 5350 km. This image is a detail of a larger composite view: see related images.

Graham Land is the part of the Antarctic peninsula that is closest to South America. Different islands around the peninsula are indicated here (clockwise and starting on the left):