VIRTIS view of the Earth (VIS-3)

VIRTIS view of the Earth (VIS-3) 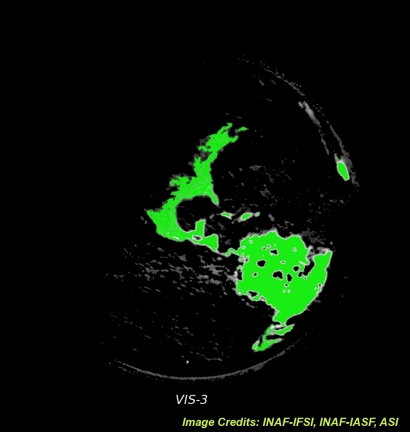 One of the two channels of the VIRTIS instrument is the Mapper (VIRTIS-M), a hyperspectral imager that collects image data simultaneously in 864 narrow, adjacent spectral bands (colours). Interesting type of contrast enhancement can be done using selected spectral features.

The chlorophyll spectral band, for instance, provides an immediate means to distinguish between ground as opposed to either sea or clouds. In this figure (called "VIS-3" in the related composite image "VIRTIS spectral images of the Earth", linked from the right-hand menu) the distribution of the chlorophyll over the visible hemisphere is shown.

The colour scale of the image is such that maximum chlorophyll abundance is represented in green. The black patches over several regions of South America are caused by dense clouds that completely mask the ground.