VIRTIS view of the Earth (IR-1)

VIRTIS view of the Earth (IR-1) 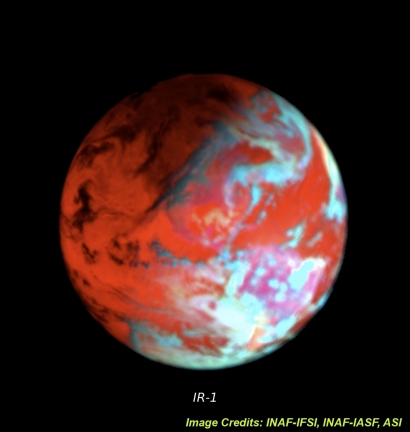 This image (called "IR-1" in the related composite image "VIRTIS spectral images of the Earth", linked from the right-hand menu) shows the Earth in the infrared spectral range. It was made using a combination of colours with the R, G and B channels of the image selected at 4.92 µm, 2.25 µm and 1.20 µm respectively.

In this spectral range the Earth has a completely different appearance than in the visible as VIRTIS-M is sensitive both to the reflected solar radiation and to the emitted thermal radiation. This is the reason why the night side shows up in this image.

The cyan areas are related to high altitude clouds, which are particularly bright in the near infrared range on the dayside. Landforms appear pink.