VIRTIS view of the Earth (IR-2)

VIRTIS view of the Earth (IR-2) 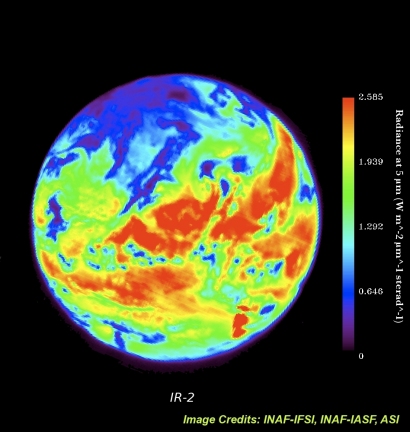 One of the two channels of the VIRTIS instrument is the Mapper (VIRTIS-M), a hyperspectral imager that collects image data simultaneously in 864 narrow, adjacent spectral bands (colours).

This image (called "IR-2" in the related composite image "VIRTIS spectral images of the Earth", linked from the right-hand menu) shows the Earth in the infrared, limited to only the thermal emission at 5.0 µm. The Earth looks fairly uniform on the day and night side which is respectively the right half and left half of the visible disk in this view (the terminator running diagonally from top right to lower left across the Earth).

To the right in this image is the colour scale that was used corresponding to the measured radiance at 5.0 µm in MKS units. The warmest areas (in orange-red) are on the day side and in the equatorial region, while the coldest areas (in violet) are the top of the clouds and the region in the top-left quadrant of the image which includes Canada and the Arctic.

For a comparison of this image with four other views of Earth based on VIRTIS data that was collected around the same time as this image, see the related image "VIRTIS spectral images of the Earth".