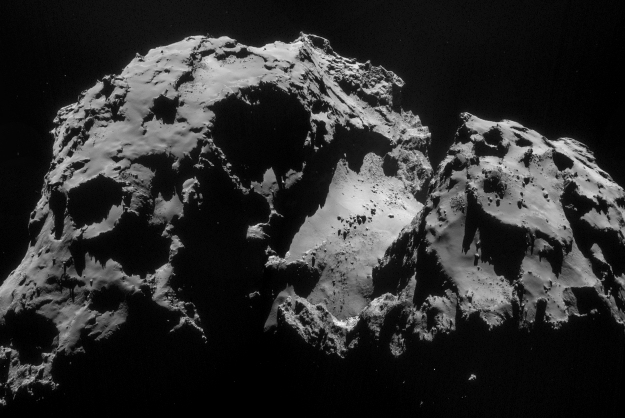 Mosaic of four images taken by Rosetta's navigation camera (NAVCAM) on 24 September 2014 at 28.5 km from the centre of comet 67P/Churyumov-Gerasimenko.

The images used for this mosaic were taken in sequence as a 2×2 raster over a period of about 20 minutes, meaning that there is some motion of the spacecraft and rotation of the comet between the images. The mosaicking programme that was used (Microsoft ICE) seems to have done a nice job of stitching the images together, but if you refer to the four separate images you will see some differences in illumination and shadows.

The four individual full-frame images are available as related images in the right-hand menu.
Note this mosaic has been rotated by 180 degrees and cropped to remove most of the black space around the comet. The images were background subtracted to remove some striping and fixed noise patterns.