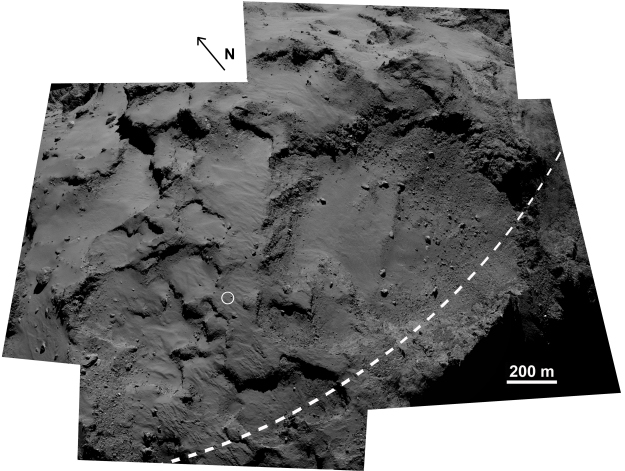 The Agilkia area on comet 67P/Churyumov-Gerasimenko. The circle indicates where Philae touched down for the first time on 12 November 2014. The dashed line marks the comet's equator. The large depression is the Hatmehit region.

This image is a composite of five frames from the OSIRIS Narrow Angle Camera, acquired on 14-15 September 2014.

A version of this image without annotation is available here.

A detailed description of the features of this region can be found in "Geomorphology and Spectrophotometry of Philae's Landing Site on Comet 67P Churyumov-Gerasimenko" by F. La Forgia et al., doi:10.1051/0004-6361/201525983, published in the Astronomy and Astrophysics special issue on Rosetta mission results pre-perihelion.

See also, "The ups and downs of a comet's surface".

The Agilkia area on comet 67P/C-G

Rosetta and Philae: one year since landing on a comet