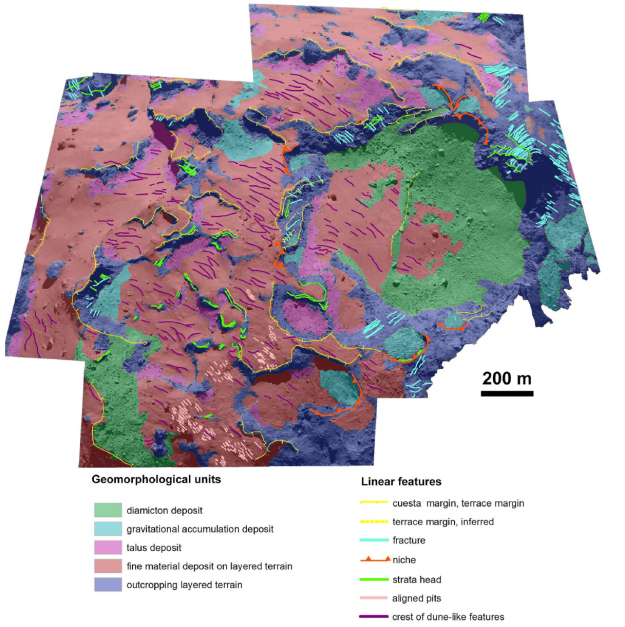 A geomorphological map of the area referred to as Agilkia. The main geological units have been identified on the basis of their shape and structure.

Much of this area, which includes the Ma'at and Nut regions, is covered by smooth deposits of fine-grained material (indicated in pink). Dune-like features (magenta lines) within these regions seem to be aligned in a similar direction suggesting that there is a prevailing direction associated with the comet's gas activity.

The formation of chains of small pit-like features (pink lines) is attributed to the effect of sublimation of icy chunks.

Deposits of fine and coarse material (light blue) are observed at the foot of various outcrops (yellow lines). This could be due to the accumulation of material arising from local gravitational slopes.

A detailed description of the features of this region can be found in "Geomorphology and Spectrophotometry of Philae's Landing Site on Comet 67P Churyumov-Gerasimenko" by F. La Forgia et al., doi:10.1051/0004-6361/201525983, published in the Astronomy and Astrophysics special issue on Rosetta mission results pre-perihelion.

See also, "The ups and downs of a comet's surface".

The Agilkia area on comet 67P/C-G