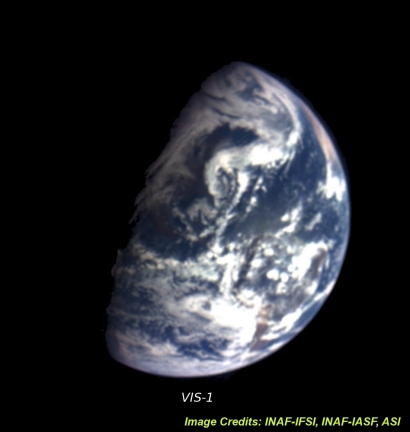 This image (called "VIS-1" in the related image "VIRTIS spectral images of the Earth", linked from the right-hand menu) has been taken over the American continents on 13 November at 14:00 UT in the visible-near infrared spectral range (350-1000nm). It has a spatial resolution of about 50 km. The selected colours are those usually adopted in RGB imaging (with red, green and blue at 0.7 µm, 0.55 µm and 0.44 µm respectively). The clouds cover almost all the Earth, with only few areas of ground in North and South America visible. On the top-right the westernmost coast of Africa can also be seen.