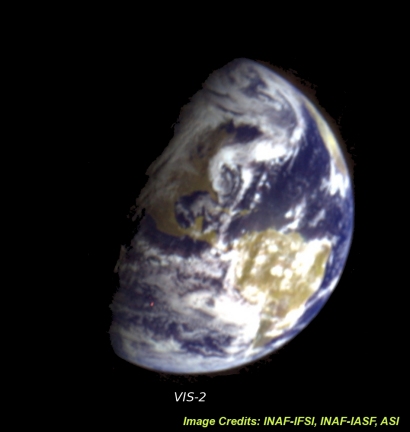 This image (called "VIS-2" in the related composite image "VIRTIS spectral images of the Earth", linked from the right-hand menu) has been taken over the American continents in the visible-near infrared spectral range (350-1000nm). It is essentially the same as figure "VIS-1" (see related images), but now the set of spectral bands (colours) that were used for the RGB channels of the image were selected to give maximum contrast to the various components: ground, clouds and sea.

North and South America are clearly seen in this false-colour picture centred on the Gulf of Mexico. Additionally, the contrast between clouds and sea is increased. This enhancement is obtained by using a combination of colours with the blue (B), green (G) and red (R) channels respectively at 0.474 µm (for the sea water), 0.785 µm and 1.0 µm (to increase the contrast of the land).